In this Daily: An Identification Guide to Some of the Animals in the Reserve at Las Catalinas

In June, Las Catalinas and Guanacaste Wildlife Monitoring partnered to place and monitor motion-activated cameras throughout the tropical dry forest nature reserve in town. The primary purpose of this project is to document the Costa Rican wildlife in the area, and in doing so understand the effects of ongoing restoration efforts in the reserve.

Today, we can share another video of the animals in the wildlife reserve. Compiling the highlights of 1596 individual sightings from the past three months, this video offers a glimpse into not only the species in our area, but also the way that they interact with each other.

In Costa Rica, animals must interact with other creatures whose habitats range from North America to South America. This creates relationships that could not exist in any other region in the world, which is one of the reasons why protecting these environments is so important.

We’re also going to provide a quick-reference guide to animals in the reserve, including their distinctive characteristics and some of their behaviors. 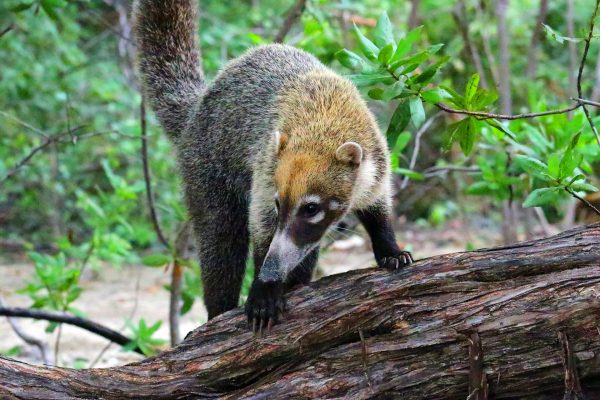 Physical Description: The white-nosed coati is native to the forests around Costa Rica, and typically range from one to two feet long. They’re easily recognized thanks to their snout, white facial markings, and question-mark tail, which can be as long as their body.

Activity: Coatis are typically active throughout the day and into the night as they forage for food.

Notable Behaviors: Females often travel in large groups called bands, which can be seen in the video above. Male coatis are traditionally more solitary, only joining bands of females during breeding seasons, which coincide with the rainy season due to the availability of food.

Interesting Facts: Coatis recognize each other by scent, behavior, vocalizations, and distinctive markings. They also have a complex method of communication based on posture and distinctive sounds that are used between individual bands and the greater population of coatis.

Perhaps most well known are their loud cries in the case of forest fire, which warns other animals to escape. This vital role in the ecosystem lead to Costa Rica’s Programa de Manejo del Fuego SINAC-MINAE (national forest fire prevention program) creating the mascot of Toño  Pizote. 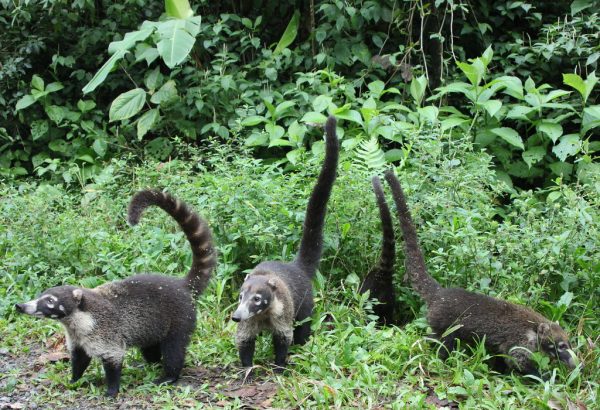 A Band of Coatis. PC: Commons

Physical Description: Ocelots are the size of a medium to large sized house cat, with a mix of cream, tawny, black, and even reddish or gray markings. These markings come in a blend of stripes, spots, and bars unique to each animal, that in the words of wildlife author Ernest Thompson Seton “appear to have been put on as the animal ran by.”

Activity: Ocelots are typically active during twilight and evening hours as they hunt. During the day, they can be found sleeping in hidden dens on the ground or under large trees.

Notable behaviors: Ocelots are active solo hunters, which typically engage in three behaviors while out searching for prey. They have a slow, silent walk to monitor for potential food items. Ocelots also have a more decisive movement when they know of a kill site or a high-activity area. At times, ocelots also participate in perched hunting, in which they lay still in high-traffic areas waiting for prey animals.

Males and female ocelots tend to live separately, and follow relatively strict territories for sexes. Often, males have a slightly larger range that will encompass the territories of several females.

Interesting Facts: Ocelots are listed as Threatened on the IUCN Red List, which is why these sightings are important. In some places across Central and South America, the habitats of ocelots are under threat, which makes it valuable to have a thriving population in this protected reserve 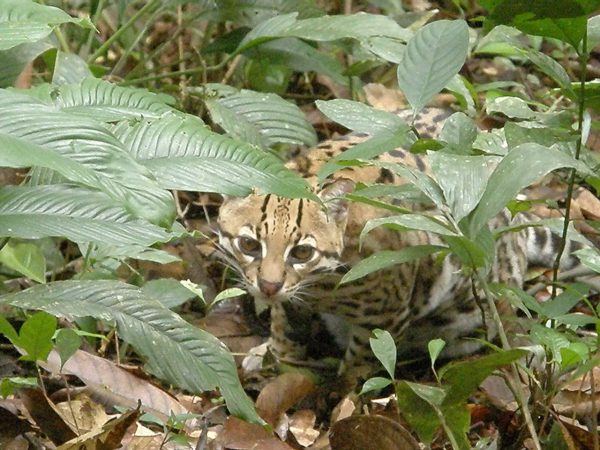 Ocelot in the Foliage. PC: Commons

Physical Description: White-tailed deer are typically tan, with coats that occasionally fade to gray, and have a bright white coloration on the underside of their tail. In Central America, bucks can be almost as tall as a full grown human with head raised, and typically weigh between 95 and 110lbs, while females are slightly smaller, some as small as 55lbs. Bucks are known for their multiple-pointed horns, which does do not have.

Activity: White-tailed deer tend to rise from sleep during the late afternoon. They’re typically very active at night as they search for food, and then settle back down during the early morning, usually resting during midday.

Notable behaviors: White-tailed deer raise their fawns by hiding them in dense vegetation when they’re born, until the young are able to survive on their own. The fawns then follow their parents for a while (females for two years, males for one).

Interesting Fact: Naturalists suggest that there are up to 40 different subspecies, due to the white-tailed deer’s range and variety of habitats. In Costa Rica, white-tailed deer are traditionally of subspecies Odocoileus virginianus truei.

White-tailed deer also generally follow “Bergmannn’s Rule”, which is a rough ecological principle in which species tend to be larger further away from the equator. As a result, Costa Rican white-tailed deer are among the smallest of their species on the planet. 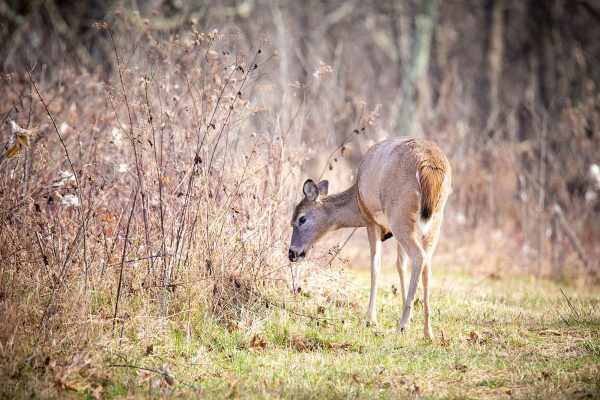 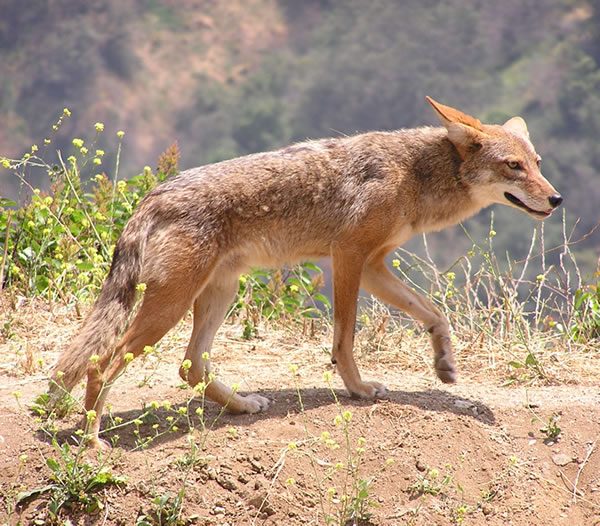 Physical Description: Coyotes are typically the size of a medium sized, slender dog, with tan fur that can turn to gray depending on the season. There are up to 19 different recognized regional subspecies, of which the central american variety have shorter hair and snouts, ranging typically smaller and more slender.

Activity: Coyote are typically active in late afternoon and at night, when they roam around and hunt.

Notable behaviors: Coyote are one of the most vocal Central American mammals, communicating with other coyotes in the population through a series of calls, yelps, and cries.

Coyotes often travel inn complex familial groups traditionally centered around a single reproductive female. These groups also include the pups as well as directly related, unmated female kin that stay to help raise the young. Males are usually seen one at a time, as they are traditionally solo creatures

Interesting Facts: These familial bonds are very important to coyotes. Other individuals may join these groups briefly to hunt larger prey, but these associations are temporary.

During mating season, a number of males will arrive to compete for the attention of the chief reproductive female, and possibly other adult females in the group. After mates have been selected, males respect these decisions and quickly disperse. Then, following the birth of the young, these families of head female, supporting females, and young reconvene (sometimes fracturing into multiple packs if there are multiple productive females), and the cycle continues.

As the young grow, both females and males fight for dominance in the first few months after they’re born, establishing a hierarchy. When they’re old enough, the males set out on their own, while the females traditionally stay with the group until they can form a family of their own.

You can see both individual males and a group of coyotes in the video above. 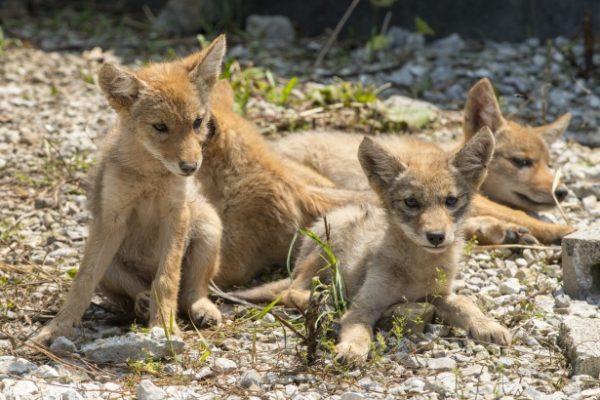 Visiting a Town on the Edge of a Rich Ecosystem

Being able to explore diverse ecosystems is a powerful thing. When you step out into a nature reserve, you’re stepping into a place that’s full of life and wild beauty, where every trip along a trail brings new encounters with plants and animals in their natural habitat.

This guide to animals in Las Catalinas touched on just four species living in the reserve. With sharp eyes, a little bit of patience, and a thoughtful curiosity, there’s many more to discover and see during any time of year. In the green season, the plentifully available water leaves plants and fruits bursting with life, which in turn makes animals more active. During the dry season, the lighter foliage makes it easier to catch a glimpse of animals moving through the trees.

For visitors interested in experiencing all of Costa Rica’s raw natural beauty, the coastal forests of Guanacaste serve as an excellent end end to an ecotourism circuit through the country. Featuring coastal forests, rich underwater ecosystems, and sandy beaches, a last stop in Guanacaste caps off a trip through the country with a blend of natural beauty and beach vacation.

Reach out to the Las Catalinas team about making town the last stop on your ecotourism adventure. They can organize your arrival and lodging in town, offer trail guides and advice for exploring the reserve, and offer a number of other services to make your visit to town as vibrant as it is relaxing.