In this Daily: Styrofoam Coring in Construction, A Valuable Asset to Building in Costa Rica

The influences of location on the design and architecture of a home are a large part of what gives each of the world’s regions their own unique look and feel. Climate, weather conditions, topography, neighborhood, and individual owner preferences can all influence the identity of a home.

Similarly, the techniques and construction methods of each home vary by region as well. It’s possible that a similar floor plan, with nearly identical structures and spaces, can be built entirely different based on the same conditions mentioned above.

Today we look styrofoam coring, a fundamental part of construction in Las Catalinas. 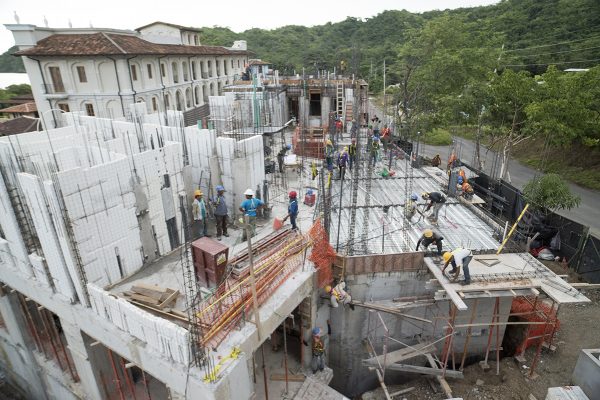 At a glance, the structures and walls of homes in Las Catalinas appear to be single uniform piece of material. From the outside this is true, as all are enclosed by concrete, layered over with plaster, and then again with layer of town’s characteristic stucco, and then other architectural details. 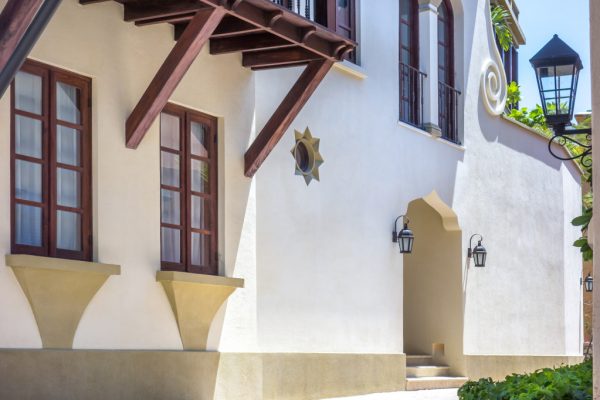 However, under the surface there’s a different story. Portions of the wall are solid, twelve-inch thick concrete, but other pieces are cored with heavy-duty styrofoam that has concrete poured on each side. This process is called styrofoam coring, and it’s a valuable asset to building in Costa Rica. 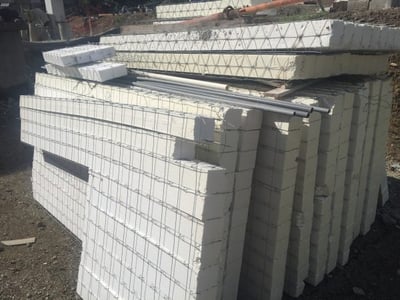 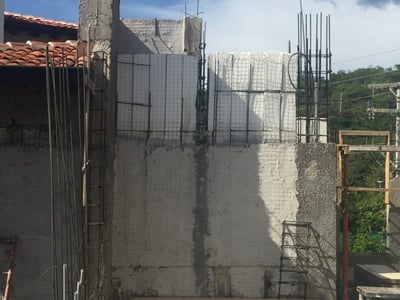 From a structural perspective, well-built homes don’t need full walls of thick concrete to be stable and safe. Instead, thick support beams of poured-in-place concrete first form the skeleton of the home. Then, these massive sheets of industrial styrofoam are laid down and held in place by rebar and wiring. 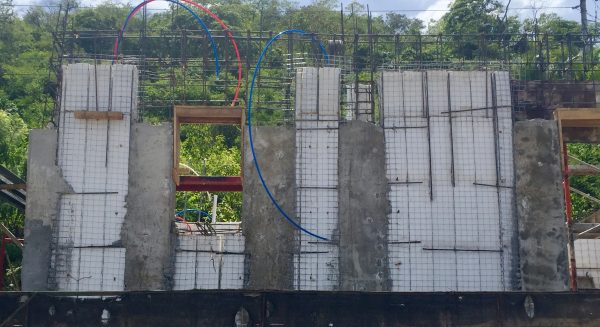 Concrete an inch thick or more is then layered around both supports and styrofoam, creating a connection between these thick concrete supports, which can be seen below. 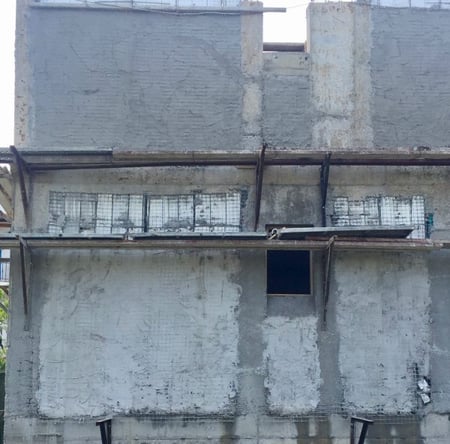 After thin layer of concrete

Sometimes, another layer of concrete is laid around both cored-walls and solid supports, joining the two elements together. You can see each of these phases currently in process on 6 Calle Cartagena. 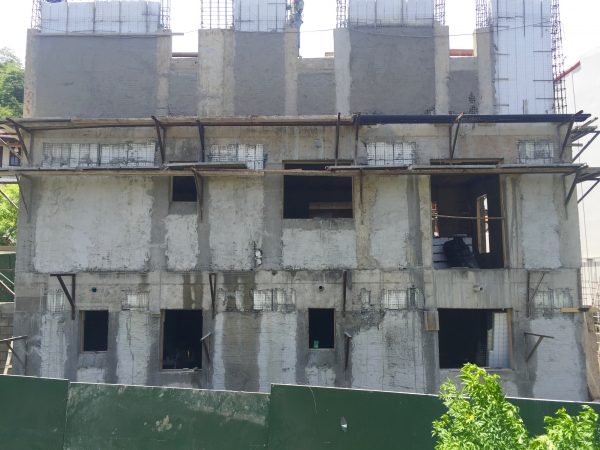 At top right, the styrofoam coring is in position, but does not yet have the initial layer of concrete. On the rest of the top floor concrete has recently been poured, and is topped by the styrofoam structure.

On the middle floor, the lighter colorations signify dried concrete, where columns and cored walls have been joined together. On the bottom floor, the gray work has been completed, with another very thin layer of concrete or plaster called repello that serves to smooth walls and columns together into one cohesive structure.

Foam coring is also valuable when adding architectural detail, such as the “gifts to the street” that the unique doors of town provide to the pedestrian experience. 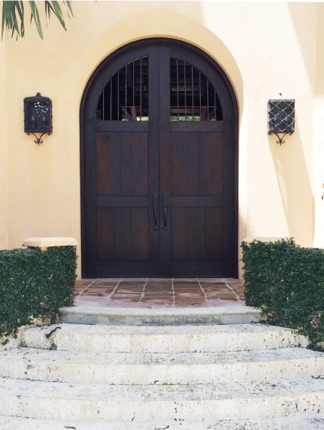 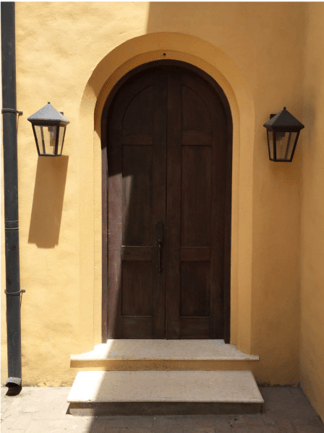 Above, the front and back doors of Casa de Tom showcase the versatility that styrofoam affords construction. Styrofoam is easily molded, so once the structures of the home have been laid in place, detail work can be done using the foam-core as a base. 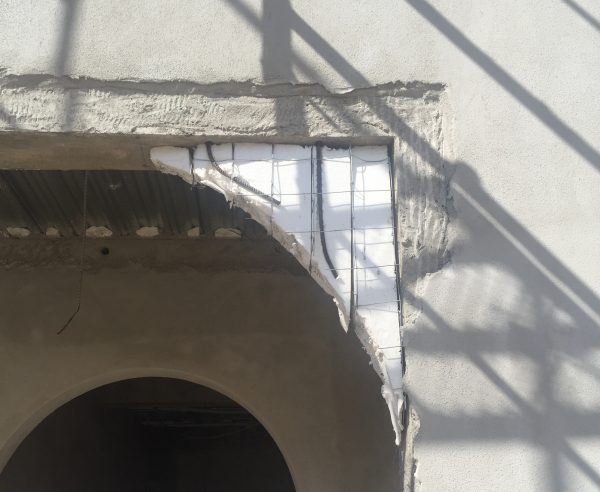 In this case, designers are adding a curved edge to an entryway. An aesthetic touch that’s made much easier to execute by the styrofoam coring.

After the Gray Work

The basic structure of the home is called the “gray work”, due to the coloration of the concrete. Once this basic structure is complete, a layer of plaster is added next, which seals in the walls and turns this gray work into a single cohesive structure.

It’s at this point that the home starts to look more like a home and less like a construction site. From there, the next step is to paint on the stucco, which gives homes their color, and then the long process of finishing work like doors, windows, and finally interiors can begin. 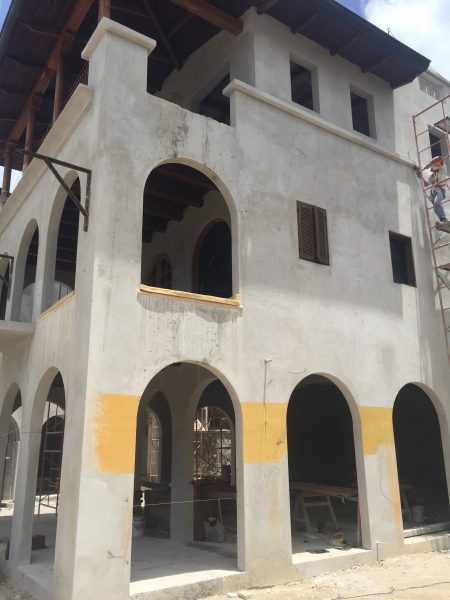 Above on the Plaza del Mercado Flats, you can see each of these elements starting to come together. Foundation, foam coring, structural details, plaster, stucco, and even the early signs of finishing are all present.

Apart from convenience in construction, this process also produces a number of benefits to residents of the home, especially living in Costa Rica. Compared to solid concrete, styrofoam coring has a much higher R-value, which measures a two-way barrier’s ability to resist the conduction of heat and sound.

As a result, these styrofoam-cored walls insulate the home from sound and heat much better than a full-concrete counterpart, keeping the insides of the home cooler and quieter. These foam-cored walls also add privacy from the street, keeping conversations and sounds inside. 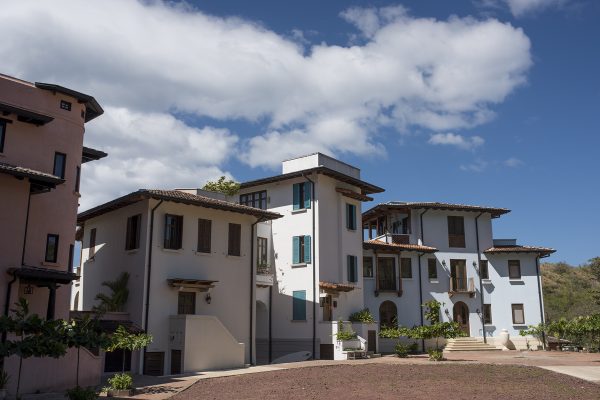 Styrofoam coring helps with the longevity of homes as well. Building using this process increases the flexibility of and reduces the weight of a home by almost sixty percent. These lighter and more flexible homes are far more equipped to handle the possibility of tremors or mild earthquakes by expanding and contracting slightly to adapt to underground activity.

What this means is that as homes settle over the course of decades, the walls and structure will remain stable and the home stands just as tall and as beautiful for generations to come.

Flexibility, the ability to add detail, and effectiveness during the build make the use of styrofoam core valuable for the general contractor. Extra insulation and longevity make this process valuable for the homeowner. And finally, the fact that this process reduces building costs compared to most alternatives mean that it’s appreciated by everyone involved.