In this Daily -- A Look at the Week Ahead 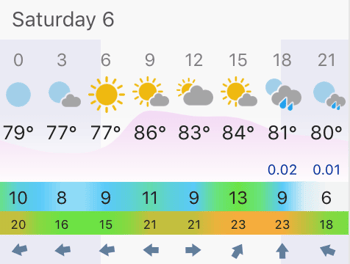 The onshore winds of this afternoon bring with them some extra cloud cover and cooler temperatures, as well as the not-likely chance of a light sprinkles after sunset. This weekend's been a pretty distinct foreshadowing of the season to come at the end of the month, but we expect quite a few more hot summer days before we start looking up for rain after lunch.

Some new wellness activities from our friends at Casa Chameleon are starting this week, all taking place up in the hotel's open-air Yoga Studio. It's a brilliant space that looks out across the coast and the ocean, and has long played host to Functional Fitness and friday Yoga Classes, but some new additions are coming. From now, Yoga Classes will be hosted on Mondays, Wednesdays, and Fridays, all starting a little before 9am. And in addition, on Tuesdays the space will host a Pilates course, while on Thursdays, the area will play host to a Yoga Nidra guided meditation session. It's a selection of excellent additions to the wellness scene in town.

Other major events around town will be Tuesday night's Cuba Libre Pop Up Dinner at the Beach Club, which will feature some of the favorites of Cuban Cuisine like fresh cocktails, smoked pork, spicy and sweet appetizers, and cool delicious desserts. And later in the week Sunday Brunch is back again, now in Ponciana and just as delicious as always.